Shop rē•spin product now
rē•spin YOUR FIT is live!
What is rē•spin??
Home | NOURISH | Cooking from the Heart with Mina Stone

Cooking from the Heart with Mina Stone

Can your energy impact your food? 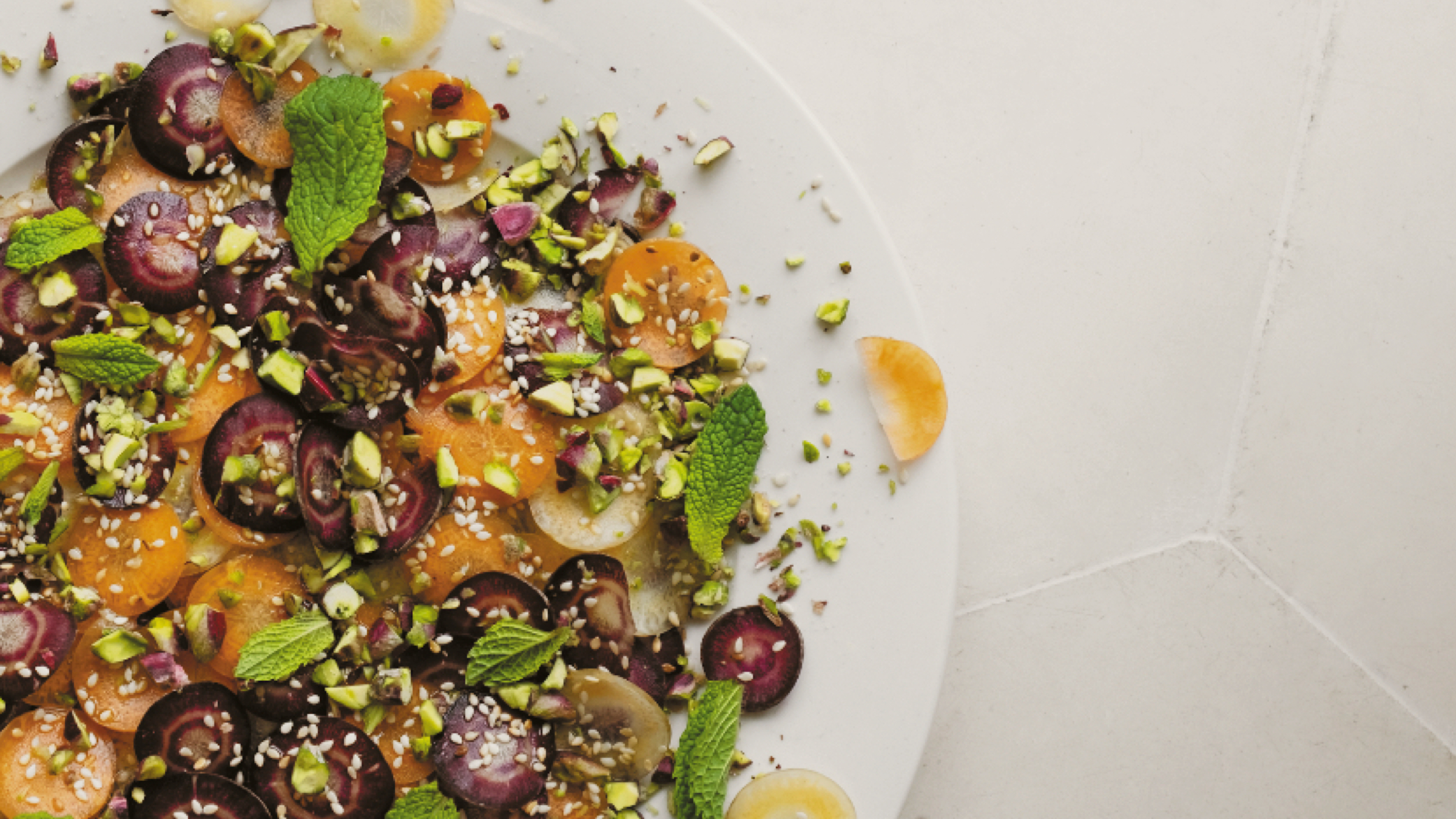 Mina Stone is a culinary fixture in New York’s art world. She regularly prepared lunch for Urs Fischer and his staff out of his Brooklyn-based art studio before publishing her first cookbook, Cooking for Artists, under his imprint Kiito-San. While it’s easy to imagine that meals capable of inspiring famous artists like Fischer and Elizabeth Peyton might be complex or unapproachable, Mina’s cooking is anything but. Her recipes are simple, but with attention to detail. The most important ingredient is love. “Its purpose is to be direct, uncomplicated, and soothing,” she says of her food.

Her sophomore cookbook, Lemon, Love & Olive Oil, highlights her Greek heritage and conscious cooking approach. Mina believes the energy you bring to the kitchen is more important than the quality of the ingredients you cook with. In her highly anticipated second cookbook, she reminisces on how a friend’s mother was able to transform out-of-season, corner-store ingredients into one of her most memorable meals.

“My theory is that her confidence and serenity in the kitchen and the fact that she was cooking for her daughter, someone she loved, had magically elevated the meal to utter deliciousness,” she explains. “It tasted like home, like there was time and energy-infused right into every bite, even though the ingredients tried to fight against her.” Dr. Masaru Emoto backs up Mina’s theory that your feelings can transform the flavor of food. He demonstrated the powerful way emotions could affect your food during his famous Rice Experiment, where he turned regular rice into an inedible mess simply by yelling it.

“The most important thing I’ve learned from the women in my family is to cook with love, abandon, and an absence of fear,” she says. While Mina’s recipes may be simple, they’re full of satisfying flavor and flexible enough to substitute for missing ingredients easily. “It’s OK to not have all the right ingredients: you can substitute another one. It’s OK to not have the right cooking equipment—my yiayia made the best food every summer out of a toaster oven. The most important thing is understanding that experiencing good food is a sum of its parts, and nothing should get in your way.”

In the fall of 2019, she opened the doors to a small café, appropriately called Mina’s, nestled in the courtyard of MoMA PS1. The rustic, cozy café is a stark contrast to all the thought-provoking art surrounding it. Here, she and her business partner, Alex, serve what she describes as straightforward food from the heart. The menu is full of comforting, seasonal dishes inspired by Greece and New York City.

“I cherished the idea of offering our customers and museum patrons home-cooked meals that reflected the story of our identities and cultures,” she says. “We were inspired by the idea of giving museumgoers a space to process the art they’d viewed, clear their heads, and have a conversation over a nourishing meal.” Unfortunately, five months after opening the café’s doors, they were forced to shut in March 2020. Instead of succumbing to fear, Mina and her business partner rē•thought their approach and rē•opened their doors months later with new safety protocols in place, but with just as much love infused into their food.

Intentional Cooking and Why it Works

“It is the intention you bring to the table that ultimately makes the difference between an average meal and a memorable one,” Mina reminds us, and Dr. Masaru Emoto would agree.

His most famous experiments demonstrate the effect our thoughts, feelings, and intentions have over water. In 1999, Dr. Emoto published a book titled ‘Messages from Water,’ which details how human consciousness can transform the molecular structure of water.

In one of his experiments, he placed rice into three different glass beakers and filled them with water. He thanked the first beaker, repeated unloving phrases to the second, and completely ignored the third. After a month, the rice he thanked fermented and gave off a sweet smell. The second beaker of rice turned black, and the third he ignored fared the worst. It completely rotted.

Since humans are primarily made up of water, Dr. Emoto believes that consuming water infused with loving intention has a profound healing effect on us. Whole foods are also mainly made up of water, and the cooking process almost always involves it at some point. For example, washing produce, steaming vegetables, boiling pasta, and adding a splash of water to the dough. According to Dr. Emoto, making food with love is much more than a sweet metaphor. From his scientific perspective, feelings of love do have the ability to transform both the taste and nutritional quality of your food.

A Recipe of Love

Mina often accesses the deep feelings of love that go into her food by drawing on the memories of friends and family who inspire her recipes. She recalls her grandmother Macky’s straightforward approach to making salads but mostly remembers the incredible taste. She builds her salads the same way Macky taught her to be deceivingly well-dressed but straightforward.

Love may be the main ingredient in Mina’s recipes, but she’s equally devoted to cooking with plenty of lemon and olive oil. Her straightforward approach to cooking and ability to draw out flavors with the ease of only a few key ingredients are most clearly seen in her salads. Love, lemons, and olive oil are all included, but it’s the order that they’re added in that Mina believes makes a real difference in the taste.

She always dresses her greens in the following order: first the olive oil, then the lemon juice, and lastly, a generous pinch of salt. Unless it’s kale, then she follows a sequence of olive oil, salt, lemon juice- never forgetting a gentle massage at the end. But, for Mina, love needs no order; it’s continually called upon in salads and life. “A great salad holds your interest with different flavors and textures. It’s something to look forward to at every meal or as a meal itself,” she says. “Remember that simple food is delicious because there is a greater attention to detail—it’s the well-dried greens, the gentle toss, the extra sprinkle of seasoning that makes it taste just right.”

A bright rainbow of colors, this salad is tasty, crunchy, and relatively easy to prepare. What I love most about this salad is that it can be dressed ahead of time, as the carrots can withstand the dressing—and it can sit eye-popping on the table, ready to go. I like to freshly toast seeds I have in my pantry—two of my favorites are sesame and pumpkin. You can add any toasted nuts you like, but if you use pistachios, keep them raw to retain their bright green color and delicate flavor.

To assemble the salad:

Tossing the carrot slices with the lemon juice, a large pinch of salt, and lots of freshly ground black pepper in a large bowl. Add half of the toasted seeds and half of the chopped nuts and toss with your hands to combine.

Spread the salad over a large serving platter and scatter the remaining seeds and nuts on top. Drizzle generously with olive oil, another sprinkle of salt, and freshly ground black pepper, and finish with the mint leaves to serve. 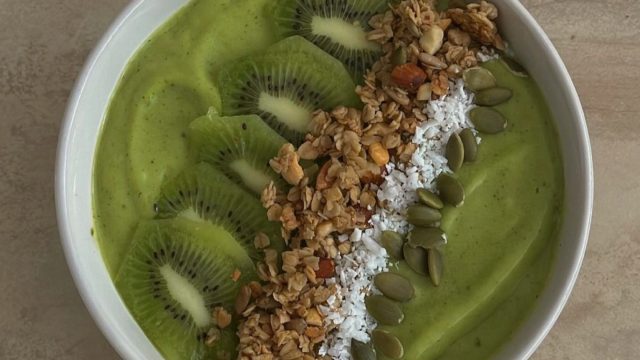 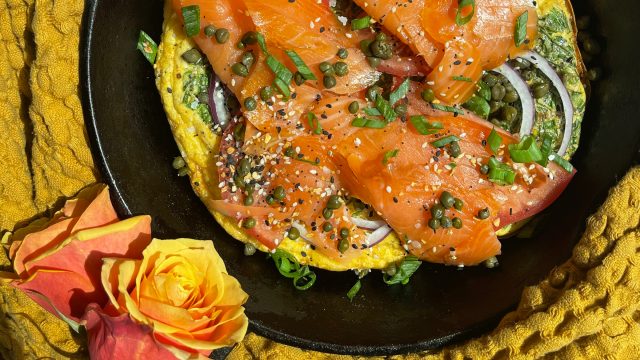 rē•spinning a breakfast classic.
By: rē•spin 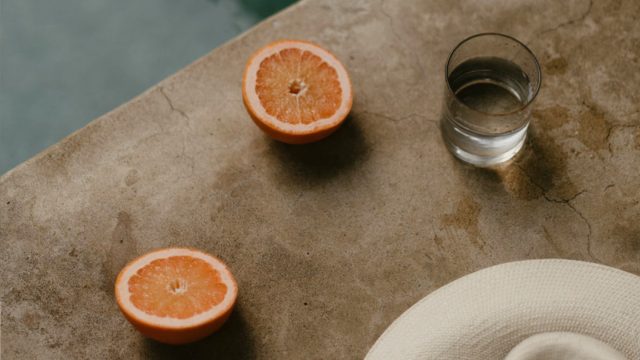 rē•spin Your Perception of a Detox

Finding new ways to approach a bodily cleanse.
By: rē•spin